Are you or someone you know addicted to Twitch? Do you find yourself spending too much time watching streams?

Well in this article we will explain how to know if you are in fact addicted to Twitch and also suggests ways to cut down or stop watching if that is what you want to do.

First, let’s address the basics. What is Twitch? Twitch is a live streaming platform for video game content and other entertainment. Viewers can watch their favorite gamers while communicating with them on the community chat. But Twitch is also about much more than just gaming content and Just Chatting content is also very popular.

What makes Twitch so addictive? 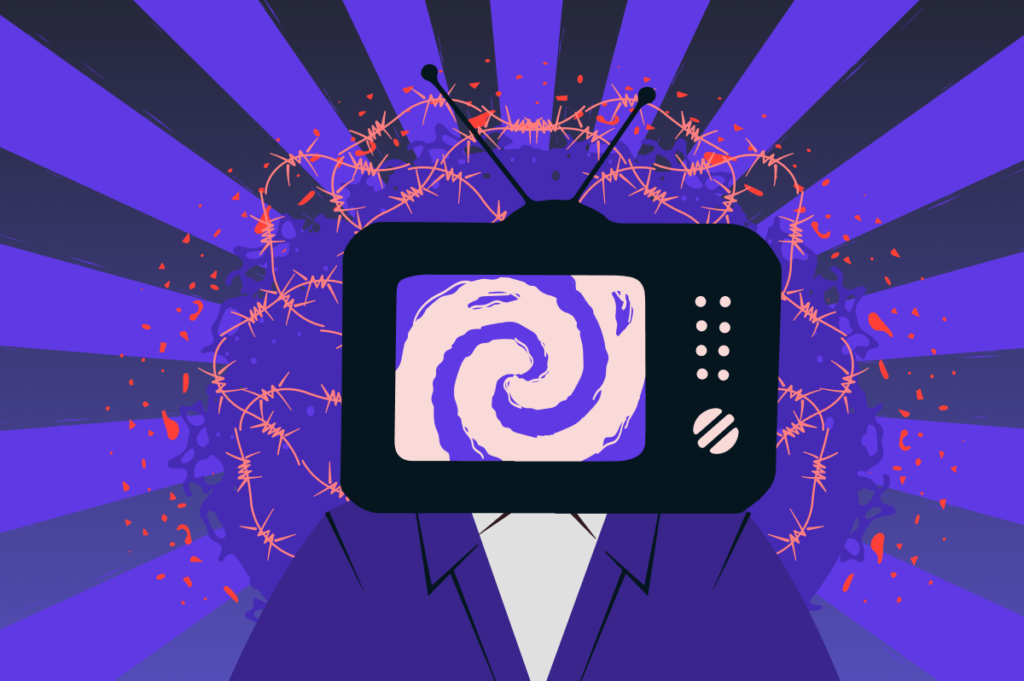 While watching Twitch can seem harmless, it actually has a significant effect on the brain. Whenever you watch live streams on the platform, dopamine signals in your brain increase. These neurotransmitters are associated with pleasure and when you get a hit of dopamine after watching Twitch, your brain identifies it as a rewarding activity you should repeat.

However, these positive feelings are only temporary and when the feel-good dopamine wears off, you can feel compelled to go back in search of more content. As Twitch is so accessible and the content never runs out, it is easy to spend hours and hours watching live streams and interacting on the chat. In extreme cases dopamine used in this way can lead to addiction.

So, is Twitch toxic? For people who watch Twitch from time to time but still have other hobbies and interests, it generally poses no risk. However, for others whose lives become consumed by watching live streams, it is unhealthy and potentially addictive.

How to know if you are addicted to Twitch 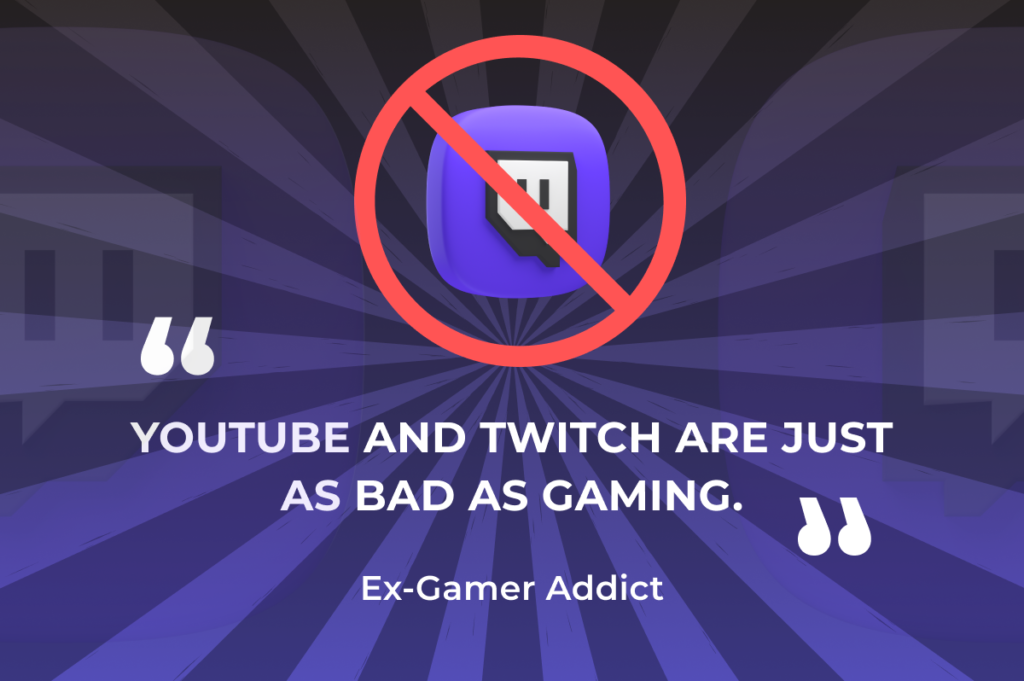 As Twitch addiction is not officially recognized, there is no criteria to establish whether an individual is affected. However, like similar social media addictions, if you or a loved one have an uncontrollable urge to watch Twitch streams and devote so much time to the platform that it has a negative impact on your life, these are signs that your usage has become addictive and problematic.

If you are struggling to stop binge-watching Twitch, these real-life stories from members of the Game Quitters community are likely to resonate with you:

“I quit League of Legends, but I realized that I’m addicted to Twitch. I could literally sit on my computer from morning to night watching Twitch streams. The bad part is that I want to quit Twitch completely but there are two streamers that I’ve been following for over a year and it’s like you feel like you’ve developed a bond with the streamers. This makes it wayyy harder to quit.”

“YouTube and Twitch are just as bad as gaming. Watching games gives you the same thrill and dopamine rush as playing. Don’t see these as better than gaming because they really aren’t. Don’t say you quit gaming but are still watching Twitch daily. Trust me, I tried this.”

“My mental health reached an all-time low as I spent 12 hours in front of a screen every day constantly keeping up a facade. I felt like I had a standard to uphold to my viewers, and it was draining.”

How to stop watching Twitch 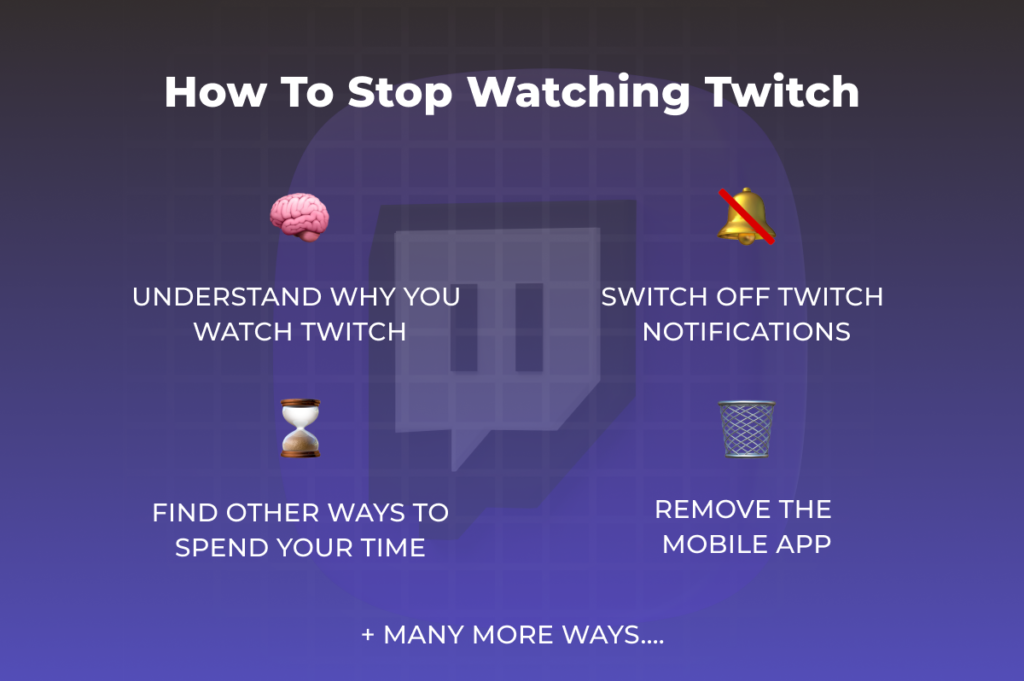 If you want to break your Twitch addiction and get your life back, here are some steps you can take to reduce or stop watching live streams.

Understand why you watch Twitch

Work out why you compulsively watch Twitch. Are you drawn to the platform to escape from negative feelings? Do you feel lonely and Twitch gives you social connection? Then try to address whatever underlying issue(s) you are attempting to resolve with watching live streams. This is also important if you spend time watching YouTube too much as well.

If you don’t want to break up with Twitch altogether but just want to spend less time on the platform, you can remove content recommendations that you are not interested in. Find out how to remove the categories and streamers you don’t want to watch from the front page. 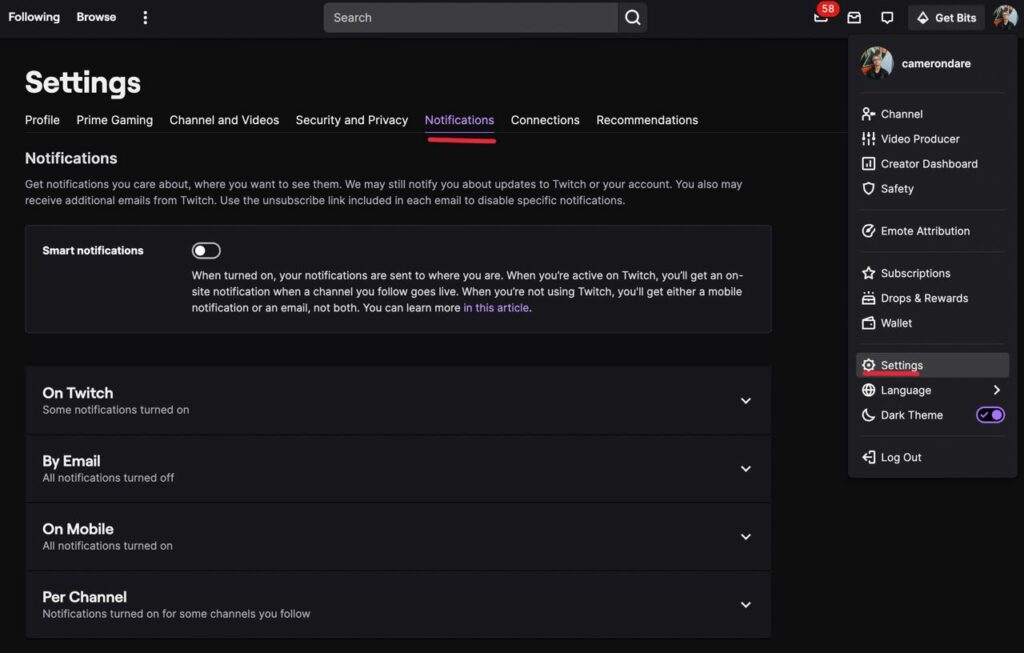 Twitch has a range of notifications which you can manage. To access them, click on your profile picture in the top-right corner and choose ‘Settings’. You can then disable notifications you receive on Twitch, email and mobile when a channel you follow goes live.

Try removing the Twitch app from your smartphone which is more instantly accessible than watching live streams via your web browser, gaming console or TV. This simple action is likely to help reduce the number of hours you spend on the platform each day.

Find other ways to spend your time

Rather than spending hours in a Twitch rabbit hole, find other ways to spend your time. Here are some ideas for replacement activities that will entice you away from the platform – whether you are looking for social, active, creative or mentally engaging hobbies.

The most effective way to remove Twitch from your life is to delete your Twitch account. You may decide to do this for a day, a weekend or forever. It’s an easy process and we have created a step-by-step guide to help you.

Identify any triggers that could make you start watching Twitch streams again. Then, work out what your default actions will be when you encounter your triggers. For example, if you turn to Twitch when you are feeling low, play some uplifting music or go to the gym instead. 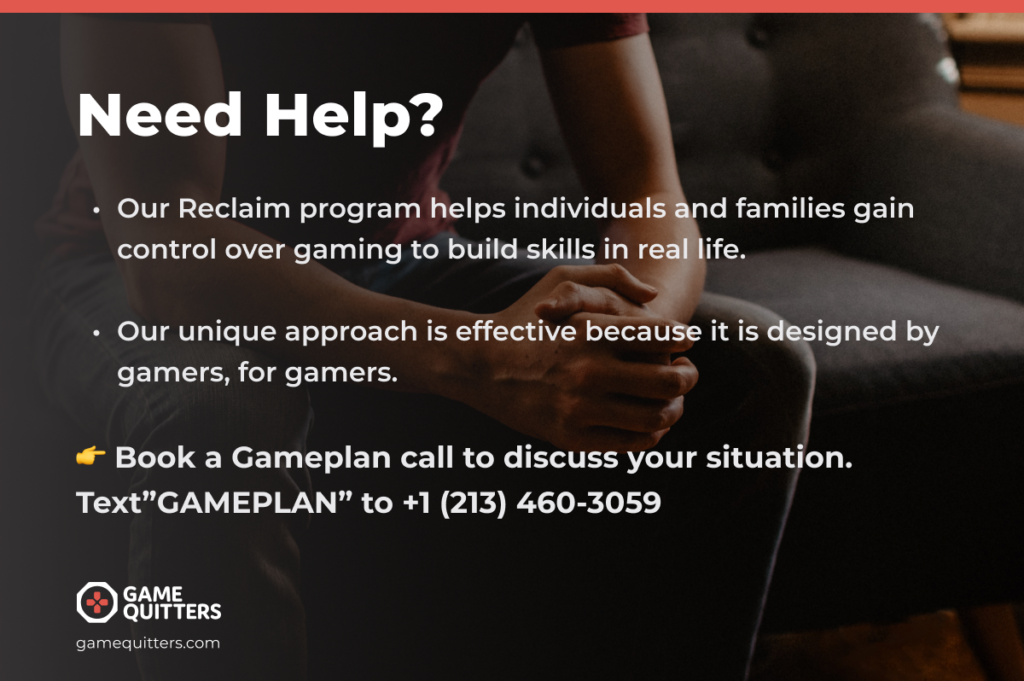 Are you worried that you can’t stop watching Twitch? Is it starting to cause problems in your life? If you have tried to cut down or stop using the platform without success, you may need professional support.

Sometimes, people who feel addicted to Twitch also struggle with gaming disorder. If you or a loved one are gaming problematically and don’t know where to turn, we can help. Our coaching program is designed to help individuals and families change unhealthy patterns of behavior.

Get in touch now to book your free 30-minute Gameplan call.

Next Post: Addicted to Discord? Here’s How to Stop Spending Time On It.