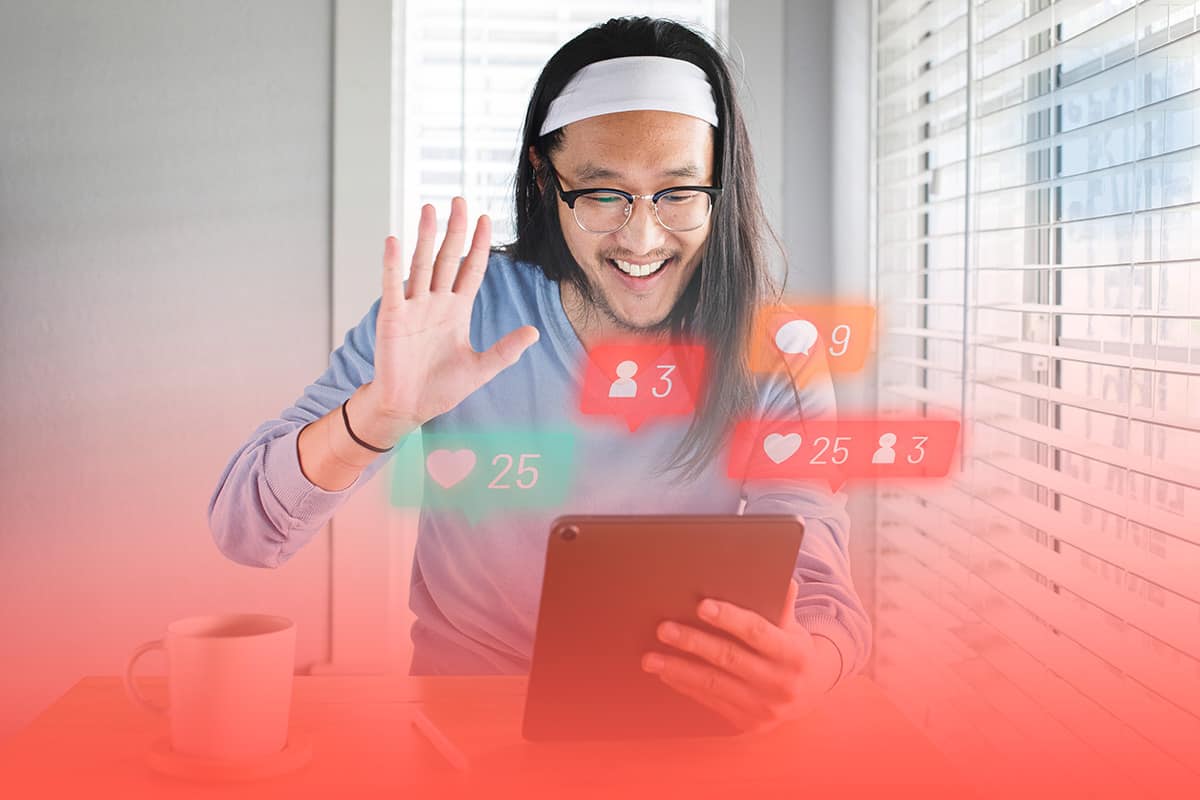 Despite the rise of parasocial relationships with Twitch streamers, TikTok stars, and Instagram influencers, these relationships are not new – they’re just more intense and more common than ever.

Covid-19 and social isolation are two major factors that led to the further rise of parasocial relationships. Studies show that this is closely related to higher depression and anxiety among younger generations.

With this in mind, let’s examine parasocial relationships: what are they, are they healthy, and how to stop them if they become a problem.

What are Parasocial Relationships?

Parasocial relationships occur when an individual interacts with a media figure as a friend or even a sexual partner. Media figures can include reality TV characters, video game personalities, and social media influencers.

The degree of these relationships vary. Some fans are simply interested in the actions of their “friend,” while others become obsessed with them to the point of imagining being in a relationship with them. Parasocial relationships happen without the influencer knowing that it even exists.

Parasocial relationships have been around since the invention of books and later television.

The earliest forms of this type of interaction were between book readers and their authors. But it wasn’t until television that parasocial relationships were in the spotlight.

Early on in the era of television, there were no reality shows, social media influencers, or video games. Instead, the only way to build this kind of relationship was through watching TV or movies.

For instance, people would watch the same actors over and over again. As a result, they would build an attachment to these characters and feel they knew them personally.

Today, the relationships are slowly shifting from having relationships with TV stars to social media influencers, Twitch streamers, YouTubers, and online personalities.

Dive Deeper: What is Twitch?

The main difference between early parasocial relationships and today is that these relationships are becoming much more common and intense, thanks to the easy availability of online entertainment.

A few decades ago, parasocial relationships were the only way to have a relationship with a media figure. Today, social media has allowed fans to interact with their idols on a greater scale.

YouTubers, Instagram influencers, and Twitch streamers are some of the most common “targets” of parasocial relationships. For example, a Twitch streamer might interact with their audience more than a TV movie actor would 20 years ago because it’s easier to respond to their fans in the chat or through messages.

However, this can also be a double-edged sword. For Twitch streamers and YouTube stars, it’s not always easy to deal with their obsessive fans.

Take Pokimane, the most popular female Twitch streamer in the world, as an example. In 2020, she revealed how she was stalked and harassed for years by obsessive fans to the point that she felt as though she was sexually harassed by them, even though they didn’t even meet in person.

Attractive streamers and YouTubers tend to get the most attention, and sometimes, they are overly sexual. A modern term for someone who stalks an online personality and makes sexual comments about them is “simp.”

Some fans get so engrossed by their online idols they start caring about their lives more than about what is happening in their own life. They enjoy watching for entertainment, and at the same time, they’re prepared to defend their idols by any means, even by attacking fans of other streamers or influencers, creating a toxic online environment.

The biggest problem with this is the illusion of having a friend through a parasocial relationship that you can trust. However, most viewers use Twitch to cope with difficult periods in their lives, and by watching their favorite streamers, they have a way of forgetting about their real-life problems and “trusting” in their idol.

Again, these relationships serve the purpose of replacing the missing real-life relationships and achievements, either by having friends or by having a girlfriend or boyfriend. And since these online personalities have millions of followers, the scale of parasocial relationships today is bigger than it has ever been.

The effect of growing up in a world where celebrity culture is prominent is that older generations are much more likely to have parasocial relationships with celebrities. Some adults also develop parasocial relationships, and some of these continue from their teen days when they used to watch their favorite idol in their TV show or movie.

In the past, teenage girls developed parasocial relationships with musicians like Elvis and movie stars like James Dean. They showed their attraction by constantly following these stars when they appeared outside.

Today, fans can interact with their favorite stars through Twitter, Instagram, Facebook, TikTok, and other social media platforms, creating a feeling that they’re closer to their idol.

Even some of the most well-known celebrities in the world suffer from stalking and online bullyings, such as Lorde, Malik Zayn, Selena Gomez, Demi Lovato, and many others.

Who is Most Likely to Develop a Parasocial Relationship?

The most common population groups that develop parasocial relationships are teenagers and young adolescents. These relationships also happen with people who feel lonely or lack self-esteem.

It is also possible for adults to develop parasocial relationships, although it is much less common than in younger populations.

The parasocial relationships between teens and social media influencers are growing faster. In 2015, nine percent of teens aged 13 to 17 had a “media influence” online. This number increased by 12 percent in 2017.

Online platforms like Twitch or Instagram offer a much friendlier environment and a lower risk of feeling rejected. Most of the interactions with their idols are passive, and if, by any chance, their hero responds, the response will be friendlier than the interactions they may experience in real life while being bullied.

Watch: The Parasocial Problem with Livestreaming:

The most common reason for developing a parasocial relationship is the need for connection and belonging.

The need for connection and belonging is one of the most crucial aspects of living. It comes right after your basic needs, such as food and water and security.

Many young adolescents have those basic needs covered, but their need for belonging is often not fulfilled. This applies even more to young people who tend to be alone and don’t have many friends in real life.

Many young people are not comfortable with establishing relationships in real life. They don’t have a social circle or a group of friends they can rely upon. Therefore, they turn to their online idols as a form of self-esteem boosting and social interaction.

In China, video game players developed a relationship with the main character in Travel Frog. A study from July 2021 reveals that the main reason for this relationship is that young Chinese players wanted to replicate the perfect parent-child relationship. This again shows that parasocial relationships primarily developed because of a need for socialization.

Another big factor for developing parasocial relationships is physical attraction to the characters in question.

Other possible reasons for parasocial relationships include:

What is a Parasocial Breakup?

A parasocial breakup is the discontinuation of a relationship with a media figure. For example, the fan will move on to another person to who they can get closer. In this way, the parasocial relationship helps the person let go of the other person and start afresh.

Some websites collect breakup stories from fans who have been in parasocial relationships for years. Several of these sites allow people to anonymously share their experiences and then find others with similar experiences.

Some people that experience these breakups even experience negative symptoms of a breakup, such as aggression, depression, anxiety, fear, sadness, and insomnia.

This study investigating parasocial relationships between the fans of the TV series “How I Met Your Mother,” and the main protagonists of the series found the stronger the perceived relationship, the stronger and the tougher the breakup will be.

Parasocial relationships can be toxic and unhealthy, especially if the relationship is strong.

Many of the fans in these relationships want to have real interaction with their idols, but they will never have that. Even if they do get a response from their idol, the responses are usually shallow and impersonal.

While this might be an advantage to those who suffer from loneliness, these parasocial interactions are not adequate replacements for real-life interactions. Instead, they create a false sense of having friends, but those friendships are imaginary in reality. This can even deepen a sense of loneliness in the real world, which might lead to depression.

Parasocial relationships can also be harmful to streamers, celebrities, and influencers. Their admirers and fans create a great deal of pressure, which can be too much for some celebrities to cope with.

Do I Have a Parasocial Relationship?

Do you have a parasocial relationship?

Here are some common signs that it is indeed the case.

If you have such a relationship with someone, it’s best to acknowledge how it impacts your life.

If this is your only way of connecting with other people and replacing other relationships in your life, then it might be time to reconsider it.

How to Stop a Parasocial Relationship?

However, if you overindulge in this relationship and replace all other forms of social interaction, you need to do something about it.

The most important thing is to acknowledge it. You don’t have to feel bad about it, but you need to be aware that it’s happening. If you don’t have anyone to talk to about this and feel like it’s not good for you, you might want to speak to a therapist.

It might also be worth looking for ways of how to socialize with other activities. For example, you might benefit from trying a hobby that requires social interaction with other people, which will help you build real-life connections instead. Try our hobby tool to see if you can find something that helps you.

If you’re addicted to gaming, we’ve prepared a practical step-by-step program called Respawn to help you get your life back on track. You can also try our other resources, such as:

Previous Post: Video Games & Lack of Motivation – What to Do if Your Son Has Lost Motivation

Next Post: How to Reduce Your Child’s Screen Time