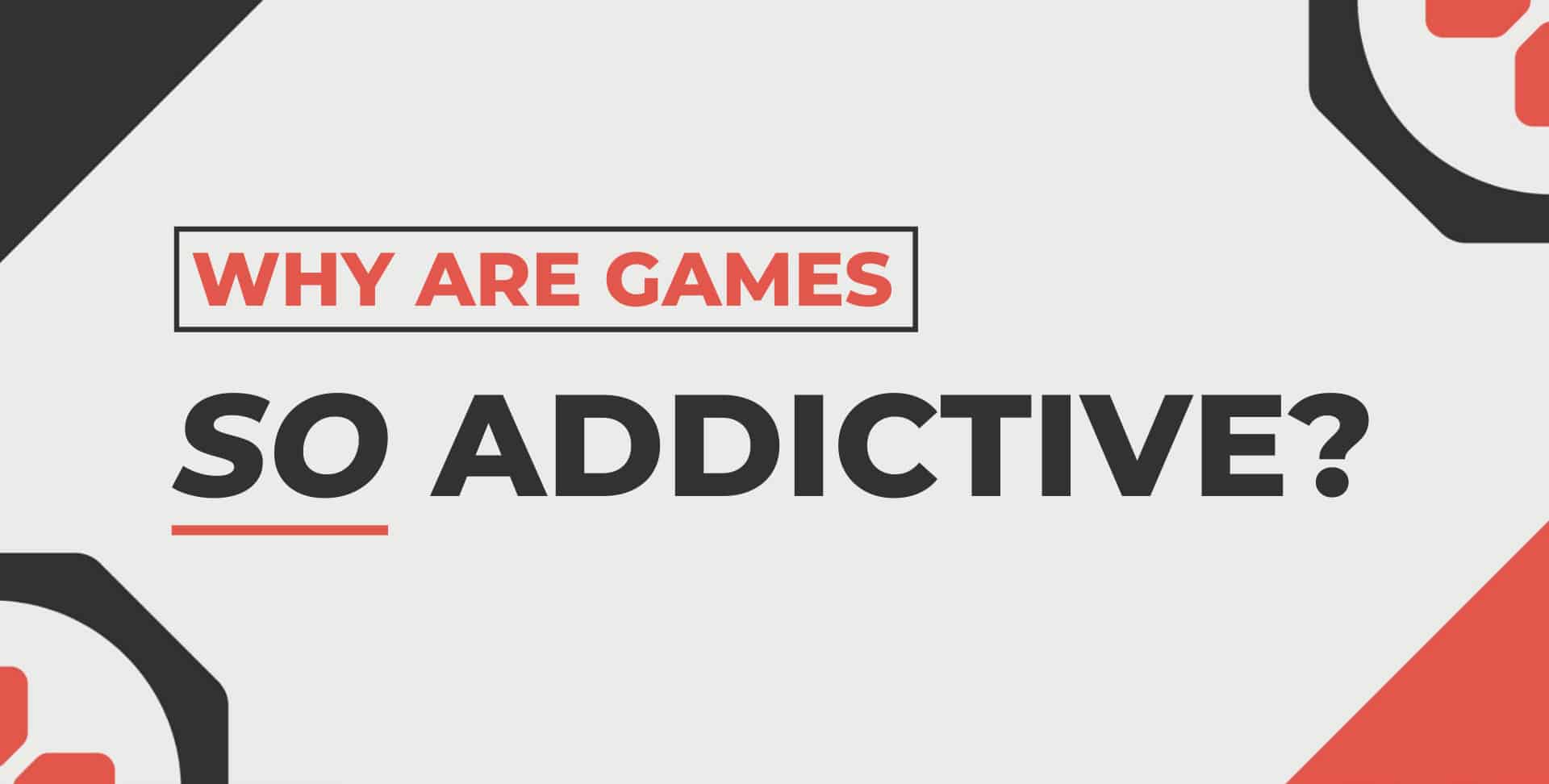 You’ve probably experienced this already – There are some games that bore you and might never again get the privilege of your time. Then there are the games that you can play for hours and days on end, literally until you are too tired to stay awake. Sometimes you might not even admit to yourself that you are tired, but either when your in-game performance suffers or your body shuts down you decide to call it a night.

Why does this happen? Why are some games more addictive than others?

A lot of it is down to personal preferences and needs, that’s why we – on a personal level – get addicted to specific games or genres.

But at the same time, a lot of players are addicted to the same games – think of the millions of players addicted to games such as Counter-Strike and other competitive first-person shooters, Battle Royale games, RPGs, MMOs, etc.

There is something about universally appealing about these games.

It has to do with how these games have been built, and the reactions or responses that they are designed to create for us.

Why Are Games So Addictive?

Some games are designed to tap into our competitive sides, for example, Battle Royale games like PUBG or other short time-limited competitive FPSs like Overwatch.

Some are designed to satisfy our social needs and the human desire to belong to a group or clan. You have games where you can be their leader or trade, interact, and make friends with dozens of other people all around the world.

Yet others give us intriguing storylines where you’re the hero and people rely on you to do your part in their fictional life – and of course, you want to help. Similarly, in some games, your real-life teammates rely on you, and again you want to prove your worth, skill and contribution. This gives you a sense of personal fulfilment, growth and satisfaction.

Most modern games are so immersive that they can allow you to escape your outside reality and be, more or less, worry-free while you play.

These mechanisms are very well thought out, down to the smallest level. If you’ve ever looked into game design you might know that games have to follow specific patterns and game mechanics – otherwise the game is either lacking a pattern that can be followed or is just plain boring.

Some of these mechanics are:

And just as some games can be boring if these elements are designed poorly, most top gaming companies hire highly experienced game designers whose sole purpose it is to perfect each of these elements.

Their result is a very ‘playable’ or addictive video game – a game that you can just come back to every single day without getting bored. Or even come back to it a long time after to replay it, because it was so good the first time around.

In other words, a game with a high “addiction factor”. 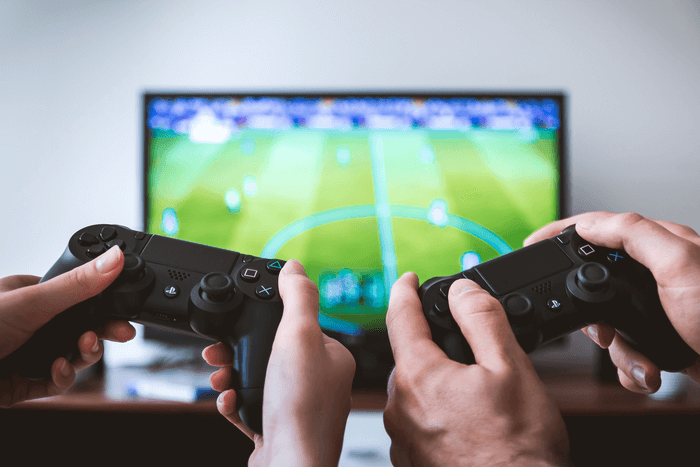 The “game addiction factor” is a simple tool that was developed by a member of our community, Leo Burca, which you can use to score all the different games you encounter.

The addiction factor can be seen as a scale from 1 to 100 on which you use to score any game.

As an example, I’ll be using the numbers and reasons that Leo gave me, but you can (and should) give this a go with your own games.

This way you know which games are most addictive and bring about the most cravings, triggering your gaming disorder. So then you know which ones to “protect yourself” from the most.

So if a friend invites you to play Overwatch “just for tonight”, you know you have to refuse because it could eventually lead to you spiralling back into a video game addiction.

It’s important to point out that these scores are individual, because of all the elements we’ve previously discussed – each game affects an individual differently.

First, how well a game matches our unfulfilled individual needs. These relate to:

The more needs a game fulfils, the more addicting it becomes to each individual.

To continue with the Overwatch example above, here’s what Leo said about the game using his direct quotes:

It was matching this need because I didn’t have anything competitive in my personal life. The 6 vs 6 matches in Overwatch are highly competitive, require skill improvement and constant adaptation to new heroes and new team compositions.

It was a partial match for me as I had a girlfriend at the time and friends that I shared hobbies in common with. But, because the game required communication and collaboration in order to win, the game fulfilled this need as well – I could go on playing for days or weeks without needing to see my friends in real life.

This was a big factor drawing me back into the game regularly. Without getting too much into the details, a lot of my plans and dreams were failing and I didn’t see any way to fix the situation. I tried to process the loss consciously and logically, but the pain was still there. And while I was gaming I was so immersed that I didn’t have to think about that..

This was a mixed one because even though I knew very well that this would not give me growth in my personal life and get any of my plans back on track, it still gave me a feeling of satisfaction. Every time I would have good teamwork or I would get to a new rank, I inevitably had a sense of personal accomplishment. These other plans crashed and burned even though I worked super hard, but at least I was still good at something and my team appreciated my contribution.

This is just an example, but you can score video games without breaking it into categories as I did, but this is the simplest and easiest approach to take.

Fighting Against the Gaming Industry

So far we have two main elements that increase the likelihood of a game being addictive:

However, it doesn’t stop there.

Game companies have developed ‘hooking tactics’ to get you to login on a daily basis, or at least a weekly basis in order to get free rewards. Rewards that you would otherwise have to pay for in the game store or by purchasing loot boxes.

For example, you can buy skins for your characters and guns. Or even get new emotes to show off with when you kill someone. These things aren’t free for a company to develop when you consider the hours spent designing, testing, and marketing. But, they know that if they keep implementing these new skins and perks, you’re going to keep coming back to play.

If these “free bonuses” wouldn’t prove profitable in the long term, companies wouldn’t spend their money simply so you can spray or emote over an enemy after you kill them.

I guarantee it won’t be long before they monetise teabagging.

So even if you’re busy, have hobbies you enjoy, or projects that you need to complete – they don’t care. They’ll use as many tactics as they can to make you jump back in the game regularly to win something. Or, as is the case with many popular mobile-games, not logging in will make you lose progress – such as Farmville or Candy Crush.

Gaming has become a multi-billion dollar business and a global phenomenon. Businesses have been pushed into developing further tactics to get players gaming and increase profitability. It is simply a reality in any business that reaches critical mass.

So these businesses penetrate our environment through ads on YouTube, at the cinema, in airports – spending not millions but BILLIONS of dollars on ads yearly that they know they will make back. An estimated 5 Billion dollars has been spent in 2020, up from 4.5 billion in 2019.

We’ve identified the 4 main elements that increase your individual likelihood to be addicted to a game, as well as increase the addiction factor of games. 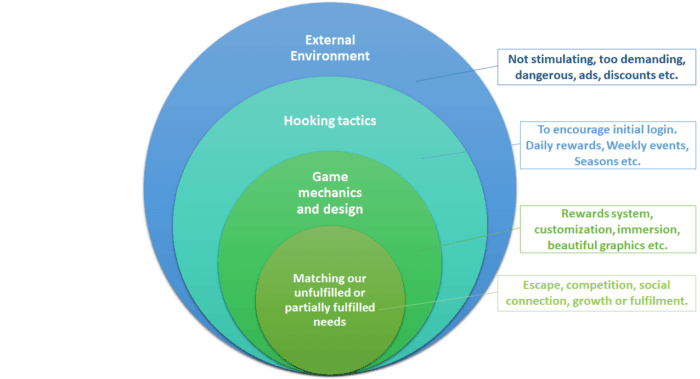 From the outer to the inner layer the elements are:

We beat ourselves up for relapsing, we tell ourselves we are weak, that we don’t have a strong will and whatnot.

But in reality, you’re fighting a well-oiled machine that’s using 5 billion dollars per year and thousands of employees to design a virtual or digital paradise that generates instant satisfaction wherever you are at the touch of a button.

Yes, you have to continue making efforts to control your addiction, but you should be kinder to ourselves when you do relapse – you’re not always entirely to blame.

If you’re struggling to quit gaming, remember you can reach out to us and to our community on our forum. We’re here to help each other get through this together.

Finally, I’d like to mention that this post was written and submitted by a member of our community, Leo Burcă [burkeh]. You can find him at leoburca.com.

Next Post: From Gaming Addict to Entrepreneur and Digital Nomad