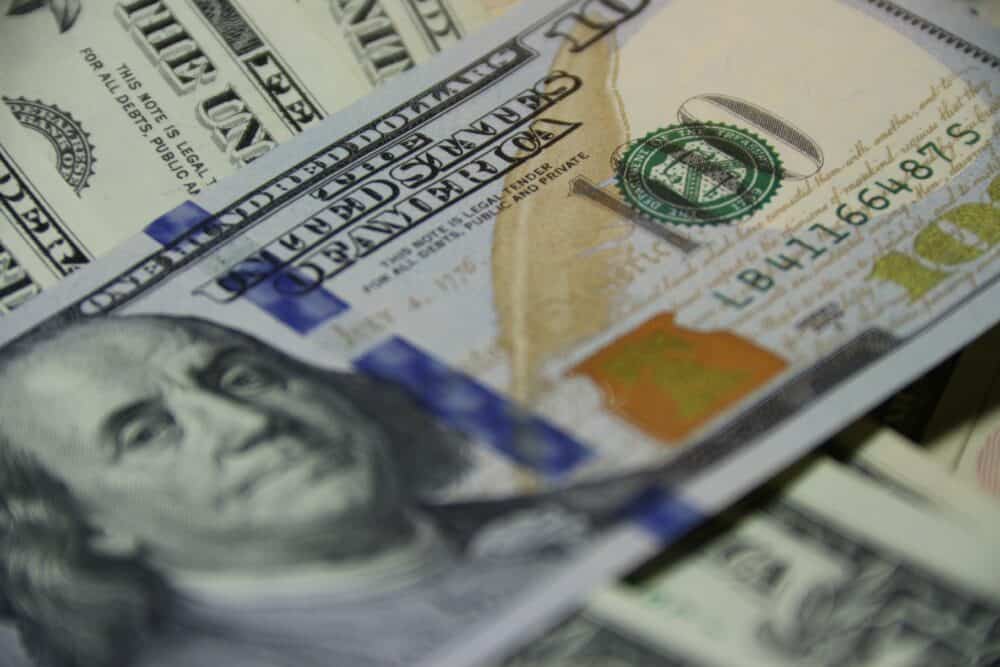 With record profits and new business models available to game developers, danger is on the horizon.

Games are intentionally designed to keep you hooked using the best practices of behavioral psychology.

Companies are earning record profits by targeting these unregulated features to kids.

Games are no longer what they used to be—fun, simple, and innocent. As technology has evolved, so too have games and the way in which they are designed. Armed with teams of behavioral psychologists, game companies deploy state of the art features to draw you in, and keep you hooked.

With each new game release, evidence builds that games are “specifically designed to exploit and manipulate the addictive nature of human psychology” as Representative Chris Lee of Hawaii has stated 1 1. New York Times: A Video Game ‘Loot Box’ Offers Coveted Rewards, but Is It Gambling? × . Worst of all, they are targeted towards the most vulnerable—kids.

How Did We Get Here?

No longer tied to a one-time purchase of the game itself, a game company could now offer their game for free (or for a small amount, usually under five dollars), and instead offer you opportunities to make small payments within the game through microtransactions. These were usually offers for upgrades, such as better weapons, faster advancement, cosmic improvements, and special or additional levels. What was once a fair playing field for all gamers, quickly devolved into pay-to-win.

Further, microtransactions take advantage of our psychology through impulse buying and loss aversion, and the problems with this type of predatory game design have only been intensified with the introduction of loot boxes.

Is It Gaming, or Is It Gambling? 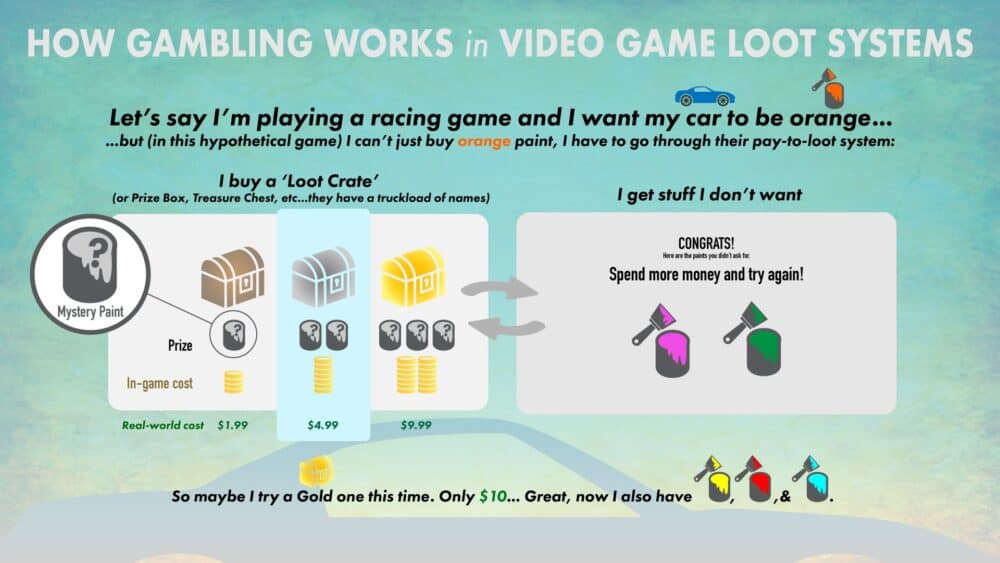 Playing video games and gambling have a lot in common. Both operate on game mechanics that include “variable reinforcement schedules in order to reward and prolong play, and use exciting and stimulating sound and light effects.” They also include repeated cycles of uncertainty, anticipation, and feedback, and the rewards are just enough to keep you going 2 2. The Guardian: Social Media Copies Gambling Tricks To Make Users Crave It × .

The clearest example of these game mechanics are loot boxes. A type of ‘mystery box’, a player can pay anywhere from a few dollars to $50 or more of real-life money for the random chance of obtaining a desired virtual item. This item may be unattainable within the game outside of winning it in a loot box, and tend to vary in rarity (common, rare, epic and legendary), so they also come with a sense of prestige. We know from gambling research that the anticipation of a potential win activates our brain’s chemical reward system 3 3. Kim, 1998: Opioid antagonists in the treatment of impulse-control disorders. × , and loot boxes prey on this psychology. Worse, they are in games everywhere.

A study found “the loot boxes in almost half (45%) of the 22 games analyzed met the criteria to be considered psychologically similar to gambling, even though they are rated as appropriate for adolescent players under the age of consent for gambling.” 4 4. Drummond & Sauer, 2018: Video game loot boxes are psychologically akin to gambling × Further, a poll by Parent Zone found 10% of 13-18 year olds admitted to gambling on unregulated casino, esports betting or mystery box games, equivalent to almost 450,000 teenagers in the UK, and this was despite age-verification procedures 5 5. Telegraph: 400,000 British teens lured into under-aged gambling through video games, investigation reveals × . Research is clear: the earlier you start gambling, the more likely you are to continue gambling into your adulthood 6 6. ResearchGate: Griffiths × .

The potential damage is significant. Gambling physically alters the brain’s structure and makes people more susceptible to depression and anxiety 7 7. Telegraph: Gambling physically alters the brain, making people more prone to anxiety and depression, study finds × , and is associated with both debt and family difficulties. Reports come out regularly of the nightmare parents have when they receive their credit card bill and discover their son or daughter had been buying loot boxes and other in-app purchases without their consent. Today’s video games are a gateway to gambling.

If science is definitive that youth are vulnerable to gambling 8 8. Wilber & Potenza, 2006: Adolescent Gambling × , and games are now clearly designed with these features, why do game developers continue to pursue this path with reckless abandon?

The answer is unfortunately simple: It is extremely profitable. In 2017, Activision, which owns Blizzard—one of the most popular game companies—reported earnings of over $4 billion dollars from in-game purchases alone, equivalent to more than half of their total earnings! 9 9. PCGames: Over half of Activision Blizzard’s revenue in 2017 came from in-game purchases ×

Predatory as they are, there is a legitimate debate about whether loot boxes are a true form of gambling. Current law in most countries doesn’t view paying real money to win virtual goods as a form of monetary exchange—a necessary component of gambling law 10 10. US Federal Gambling Laws × , which has left the market unregulated (and thus exposed and used by vulnerable populations such as teenagers). However, what if you were able to sell your virtual goods for real-life money? This is exactly what happened in the game Counter-Strike: Global Offensive (CS:GO).

Counter-Strike is a series of first-person shooter games that has been one of the most popular in history, but when game maker Valve released their latest edition CS:GO in 2012, things did not go according to plan. That is until they introduced a new game feature: skins. Skins were a unique way to decorate your virtual weapons. Acquire one in the game and you could sell it for real money. The game’s popularity exploded and grew in players by 1,500% within two years.

It also created a thriving gambling market. It worked like this: You buy a skin for cash, and then use the skin to place a bet on professional CS:GO matches using third-party websites like CSLounge. You could then sell your skin for real money, thus, placing a bet with a skin is essentially no different than placing a bet with real money.

Worse, this was an intentional strategy by the game developers, as employee Kyle Davis explained that the best way to get players “deeply engaged” in games (the terms companies use instead of “psychologically hooked”), was to “give away virtual items of random value and encourage a robust market to trade them.”

Research firm Eilers & Krejcik Gaming found more than 3 million people wagered $2.3 billion worth of skins in 2015, and of course, Valve received a kickback on 15% of the money 11 11. Bloomberg: Virtual Weapons Are Turning Teen Gamers into Serious Gamblers × . The CS:GO gambling industry was valued at $7.4 billion in July 2016, and has helped make CS:GO one of the biggest games in the world.

However, it came with a cost: lawsuits 12 12. Holden, Rodenberg & Kaburakis, 2017: Esports Corruption: Gambling, Doping, and Global Governance × . The first came on June 23, 2016 alleging that Valve “knowingly allowed, supported, and/or sponsored illegal gambling.” A second, third, and fourth lawsuit came within weeks, causing Valve to take action and shut down this illegal gambling market, but not before they had earned hundreds of millions of dollars by taking advantage of the users they claim to care for.

Unfortunately, this was not the end of the romance between the gaming and gambling industries. With the Supreme Court legalizing sports betting — paving the way for legal esports betting—this budding romance has just begun. With record profits and new business models available to game developers around the world, danger is on the horizon.

We have videos to help you better understand the relationship between gaming and gambling. Watch the videos below on Skins Gambling, Esports Betting, How to Spot a Problem and How to Get Help.

If you think you might be gambling too much, or if you are worried about a friend or relative, help is available 24/7 and 100% confidential. Call or text the National Problem Gambling Helpline: 1-800-522-4700 or send a message on chat.

Next Post: Addicted to Gaming: I’m 30 Years Old and Still Living with My Parents.