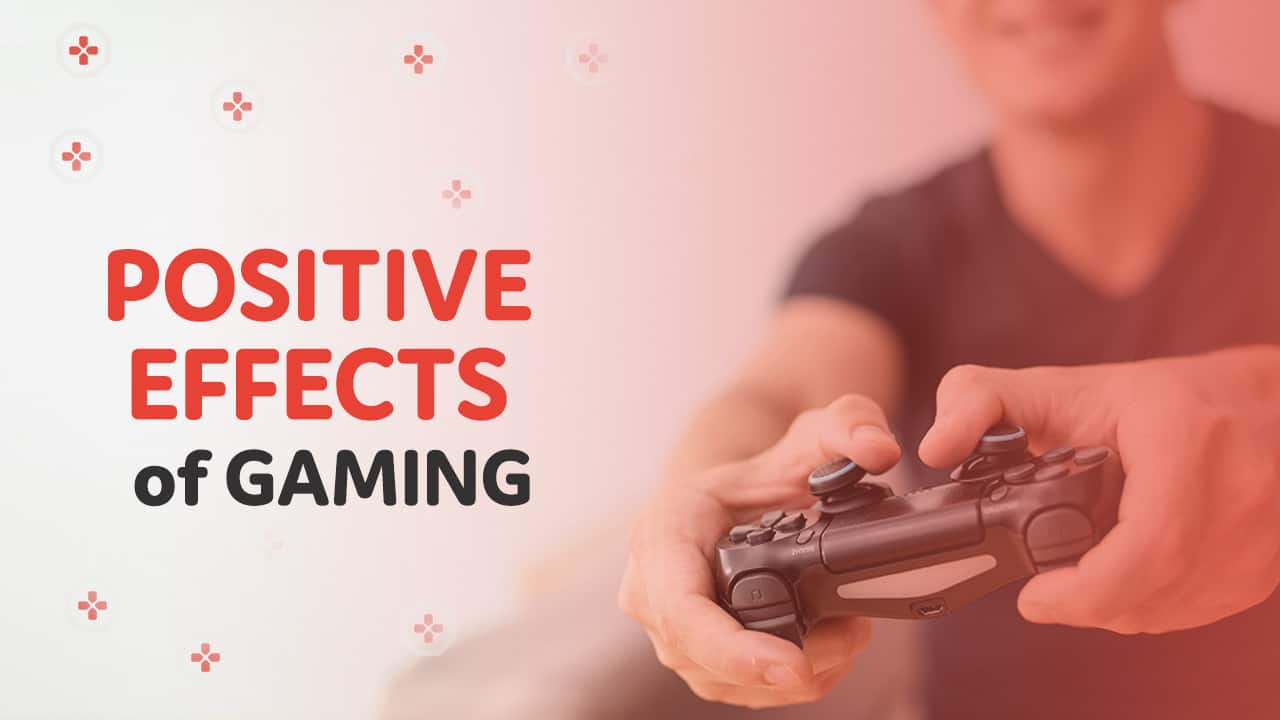 Playing video games can have positive effects and benefits, when played in moderation.

The most notable positive effects of gaming include:

These are the main benefits of playing video games that you should know about.

Video games improve some of your cognitive abilities – especially your visuospatial skills and concentration.

Visuospatial ability is your ability to recognize and remember objects and the relations between those objects. This skill can be essential for everyday tasks such as driving, finding your way in a city, or making sense of a map or objects around you.

This is one of the key positive effects of video games that might be beneficial for students and professionals, but will also serve gamers well in everyday life.

A recent study from 2015 from Australian and Chinese research teams showed that gaming improves problem-solving skills and logic.

Researchers performed fMRI scans on 27 professional gamers and found they had more grey matter and “heightened connectivity between certain subregions in the insular cortex”. In practice, this translates to enhanced cognitive abilities, which include improved problem-solving skills and logic.

Many gamers play games that require a great deal of planning, strategic thinking and using logic to achieve goals within the game, so it makes sense that they will have enhanced development in areas of the brain dedicated to problem solving and logic.

Another positive effect of gaming is increased hand-to-eye coordination.

A study from the University of Toronto in 2014 found that people who play games regularly have better sensorimotor skills than those who don’t play video games.

The study included 18 gamers and 18 non-gamers; both groups had to perform a simple task on their screens that involved following green dots with the mouse. At first, there seemed to be no major differences between the two groups.

However, as the test carried on and it got repetitive, the tests showed that gamers performed with more speed and more accuracy than non-gamers.

Games allow you to develop an ability to learn sensorimotor patterns and movements faster and more efficiently, which may help you with tasks in the physical world.

Games have shown to improve your multitasking ability.

This is one of the most notable benefits of gaming because it provides you with the ability to perform your daily tasks better and more efficiently, and also complete many tasks at the same time.

Many games force players to perform several tasks at the same time – especially action games. For example, you have to look at the enemy on the screen, keep track of your health, ammo, and other stats, as well as move your character. You might also be speaking on a microphone with your teammates and friends.

With all of the fast paced action and hyper-stimulation that modern games provide, gamer’s may improve their multi-tasking ability.

Researchers from the University of Rochester found that video games can help you make decisions faster and more accurately, which can translate into better decision-making ability in real life.

The study also found that if you play action games, in particular, you’re more likely to make faster and more accurate decisions over non-gamers, and even over players that play slow-paced games.

When presented with a problem, action game players were up to 25 percent faster than players of slow-paced games, and their decisions were also more accurate.

This skill can be valuable in areas of work where fast decision-making is crucial such as on the battlefield, or in a hospital, and gamers are primed to make these decisions faster and more accurately.

Even though excessive gaming can make you antisocial, there are many games out there that promote the social aspect of gaming.

Some games involve cooperating with other players and talking with them through text or voice chat, which can improve your ability to work with other people and have better social interactions, even when playing games.

The social aspect of gaming has also grown beyond just playing prosocial games. For example, gaming may be a popular conversation topic amongst students at school. There are also scholastic esports teams and clubs being formed, along with a convergence between gaming and social media platforms such as Twitch and Discord.

Although gaming is increasingly social, it is important to maintain a balance of face-to-face interactions and physical world friendships.

A study from 2012 conducted by Timothy J Wright and Daniel P Blakely found that people who play games are able to see more detail, especially in the periphery of their eyesight.

This is especially true for gamers of first-person shooter games where extracting information from your visual periphery is crucial for spotting enemies or dangers.

This ability to see more detail in your eyesight and in the periphery of your eyesight translates to better performance in everyday tasks such as driving.

With that said, it is important to give your eyes a break from screens, ideally for a few minutes every hour of use, as excessive screen time may cause eye irritation and eye strain.

A study by James C Rosser Jr et. al. from 2007 examined laparoscopic (abdomen) surgeon training and included young surgeons that play video games to see what effects gaming would have on their ability to perform surgeries and other medical tasks.

This study, along with others we have shared, suggests gamers do better at tasks that require speed, accuracy, and hand-to-eye coordination.

Video game players play many games that include cooperating with other members of the team to achieve the goal of the game. Some of the more popular games include Team Fortress 2, League of Legends, Dota 2, Counter Strike, and several others.

In a study conducted by Brigham Young University, teams that played video games together for 45 minutes performed up to 20% better than teams that were involved in other forms of team-building exercises.

This suggests gaming may be a good way to develop chemistry amongst team members when used as a team-building exercise. The study also shows that some games do have the potential to improve an individual’s ability to cooperate with other team members, which is a valuable skill to have in today’s job marketplace.

Playing games that promote you to stay active might improve your physical health, especially when compared to games where you remain sedentary the whole time.

Take VR games as an example. The vast majority of these games will have you moving around or at least standing up, which is already better for your health than playing games where you remain seated.

Gamers also find VR gaming more immersive and satisfactory than traditional gaming, so it’s only a matter of time before VR games become the norm in the next few years or decades.

In addition to all the main positive effects of video games, there are also some other effects that many gamers report, including:

Gaming can be a positive and beneficial experience, when played in moderation. To experience the positive effects of video games, it can be helpful to identify your motivation to play.

If you play games in moderation, for fun and recreation, you may experience many benefits. However, if you play games excessively to escape real-life problems, then you may begin to experience problems from your play, and in extreme cases, develop a gaming disorder.

Playing games can have both negative and positive implications on your quality of life so it’s important to be aware of your play and keep it in balance.

If you, or any of your loved ones, are experiencing any negative effects of gaming, we have several resources at Game Quitters to help you out:

Next Post: What Are the Pros and Cons of Video Games?