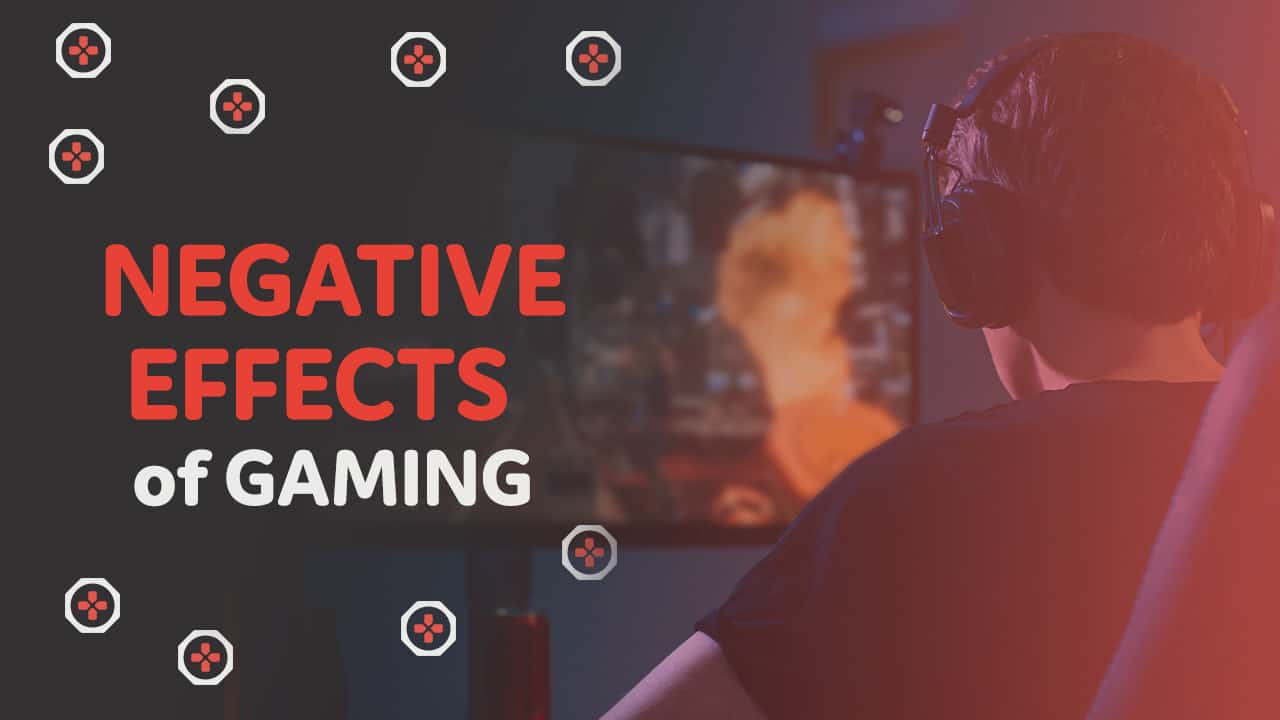 In 2020, there were an estimated 2.7 billion gamers worldwide, and the number is still rising. This rise in the popularity of video games has led to a significant increase in people experiencing the negative effects of video games.

Although not all gamers experience negative effects from gaming, and those effects vary from person to person, many do. Video game addiction statistics find roughly 2-3% of gamers can become clinically disordered.

Some of the most common negative effects of video games include:

The bad effects of video games can impact your physical and mental health, or often times both. It’s essential to understand that each person may experience symptoms differently but nonetheless gaming disorder is known to produce a range of symptoms as described here.

As with most addictions, excessive use of video games is often the reason you experience these symptoms. The more you play, the more you neglect other key aspects of your life: your social life, your career, your family, your mental well-being, and your physical health.

We can split the harmful effects of playing hours and hours of video games every day into two main categories: negative physical effects and negative mental/emotional effects.

Spending hours every day sitting in front of a computer playing video games can have severe implications for your physical health.

When you spend most of your time sitting in front of a screen absorbed in games, it is easy to forget to eat regular meals, drink water, exercise, and take care of your overall health.

As Matt, a sufferer of gaming disorder who overcame it, shares:

Some of the most common negative physical effects of gaming addiction include:

And these negative physical consequences symptoms of gaming will also start affecting your mental health. It’s important to note that both are interconnected.

Inadequate sleep is a common phenomenon for gamers. For example, take Jack from Michigan, who said the following of his sleep habits:

“Looking back, it’s pretty clear I had a problem. I started sleeping less and found myself not enjoying life as much. As a result, I became depressed and anxious.”

Hours of gaming daily often result in less sleep, especially if you play later at night or with gamer friends from different time zones. It’s easy to play “just one more game,” which results in “just one less hour of sleep.” Excessive gaming can lead to poor sleep hygiene and other adverse physical health effects.

Adequate sleep is essential for overall health. Depending on your age, at a minimum, experts advise you to sleep between 7 to 9 hours per day, but if you play games well into the night, this is nearly impossible. It can be challenging to function normally when you only sleep a couple of hours or do not sleep at all.

When you play games for several hours straight, you forget to eat, drink, and keep yourself healthy. Without the proper nutrients and water, your body will not be able to function correctly.

You’ll experience headaches from dehydration, and a poor diet will lead to muscle loss. Long-term, a poor diet may even lead to more profound negative health consequences, such as irritable bowel syndrome, celiac disease, and in extreme cases, cancer.

If you forget to eat three meals a day or drink at least 2-3 liters of water due to your gaming habits, you will experience harmful side effects.

The less you move and exercise, the more your body will start to suffer. Typical examples are weight gain, muscle loss, stiff joints, and poor posture.

Regularly sitting in the same position for the entire day can have other severe consequences for your physical well-being, such as chronic headaches and neck and back problems.

And while video gaming has a relatively low correlation with obesity, it’s also important to note that around 1% of all gamers will suffer from it due to excessive gaming. Obesity can also lead to heart problems and heart-related disorders.

For example, one of the most well-known professional League of Legends players, Jian Zihao (also known as Mad-Dog or Uzi), has recently quit video games due to his diagnosis of type 2 diabetes and other health-related problems from a fatty diet and lack of exercise. He attributed these health consequences to excessive gaming.

“I regret to inform you all that I am making the decision to retire. The doctor has told me that if I continue, there could be serious complications. Thank you to my fans for your support and companionship all these years.”

Gaming demands focus and concentration; it demands your full attention. However, the more you play or become preoccupied with gaming, the more difficult it is to concentrate on other tasks such as your schoolwork or career.

A symptom of gaming disorder is called “pre-occupation,” which means you find yourself constantly thinking about games when you’re not playing and experience difficulty focusing on other tasks.

As Jason shares in How Quitting Gaming Helped Me Get Into Grad School, “When I was not gaming, I was thinking about gaming, and when my girlfriend was talking to me, it was getting harder and harder to focus. After 20 hours of gaming in a weekend, I knew that I had become addicted again.”

Since he stopped gaming, Jason has found it easier to focus and be productive. We have a limited amount of energy, focus, and concentration to use each day. Use yours wisely.

Physical and mental negative effects of video games go hand-in-hand. When your physical well-being suffers, so does your mental well-being.

As Vadim, a gaming addiction sufferer for 22 years, describes how his physical and mental symptoms were connected:

“At some point, it got so bad I needed to quit university so that I could recover. But I couldn’t do it for very long. I wasn’t healthy, I had almost no friends, and gaming became my coping mechanism. As a result, I was very depressed and lonely.”

Playing violent video games does not increase an individual’s levels of hostility.

Several studies have shown that when we play video games, our amygdala calms down, which leads to the suppression of our feelings.

After excess use and gaming addiction, you can feel restless and aggressive, and aggression is also one of the withdrawal symptoms of gaming disorder.

There is debate on whether gaming directly causes depression and social anxiety, as the studies on this matter are not yet fully complete.

However, research such as Tortolero et al. from 2014 found a link between video games and depression. The study found that playing video games for more than 2 hours daily significantly increased the risk of depressive symptoms in gamers.

Participants in our case studies report the link between gaming disorder, depression, and social anxiety. They share significant improvements to their overall mental health once they stopped gaming excessively and overcame their addiction.

For example, Matt says this about his battle with gaming-induced depression:

“Shame and regret are two of the biggest negative emotions you can feel, and they often contribute to relapse and emotional spirals into deeper depression and anxiety.”

Other studies have also found that excessive gaming can lead to lower self-esteem, which can also be a contributing factor in depression and social anxiety.

Although we can not state that gaming causes depression or depressive symptoms, it is well established that neglecting one’s physical and mental well-being for prolonged periods, as gamers often do, leads to mental health issues.

Lack of Motivation and Dopamine Addiction

Lack of motivation to engage in activities other than gaming is a common problem that gaming addicts report. Gaming is a hyper-stimulating activity that can be more engaging than activities you can find in the physical world.

This issue may connect to how your brain responds to the dopamine rush you experience playing games. When you play games, your brain starts to produce significant amounts of dopamine, which is the neurotransmitter that induces the feeling of pleasure.

Thus, when you play for prolonged periods, your brain may get used to the rush of dopamine and high levels of stimulation, leading to no longer finding less stimulating activities interesting. When gaming becomes the only activity your brain finds pleasurable, a lack of motivation to participate in other activities is a natural outcome.

Unfortunately, even when you stop playing games, it may take time for your brain to re-calibrate and for you to enjoy experiences that include less excitement.

Suicidal Thoughts and Other Comorbidities

In more severe cases, gaming addiction can result in suicidal thoughts and other comorbidities.

Cam Adair, the founder of Game Quitters, found himself having suicidal thoughts during his gaming addiction. They began due to bullying and depression but were exasperated when playing video games for up to 16 hours a day. Although gaming provided an escape initially, it eventually led to further withdrawal from life. When hope for “real life” was lost, his suicidal thoughts became more common.

Cam’s experiences are shared by other gaming addicts as well.

José began gaming at 8-years-old with free-to-play MMOs. When he became a teenager, he would wake up late, skip classes, skip showers, and play video games. They were like a literal drug he’d take to numb himself. “I was ashamed to be seen (and smelled) in my state, so I went out of my room less and less. I became a shut-in, and the only thing I did was gaming.”

Individuals and families of people suffering from gaming disorder should take suicidal thoughts and ideation seriously. Treatment is required.

If you start to have suicidal thoughts, speak to a professional therapist or someone you trust, such as friends or relatives. Contact the Suicide Prevention Lifeline at 1-800-273-8255.

Anthony from Philadelphia also started to have suicidal thoughts, and that’s when he decided to turn things around:

“I felt I had been wasting my life in a virtual world while the real world was out there waiting for me. So when I started to experience suicidal feelings, I knew I needed help.”

Read his story of how he overcame gaming addiction after having suicidal thoughts, and you’ll see that there’s hope for you if you have similar feelings. Never give up!

If you are experiencing these negative physical and mental effects, you might be suffering from gaming addiction. Here are some ideas for how to conquer it.

How Can I Overcome My Gaming Addiction?

If you feel like you’re experiencing the effects or symptoms of gaming addiction, then the best place to start is acknowledging that you have a problem.

Although overcoming gaming addiction takes time and a lot of dedication, the reward is that you’ll get your life back. Think of all the possibilities and improvements that would occur once you remove gaming’s harmful effects in your life.

More Articles on the Effects of Gaming