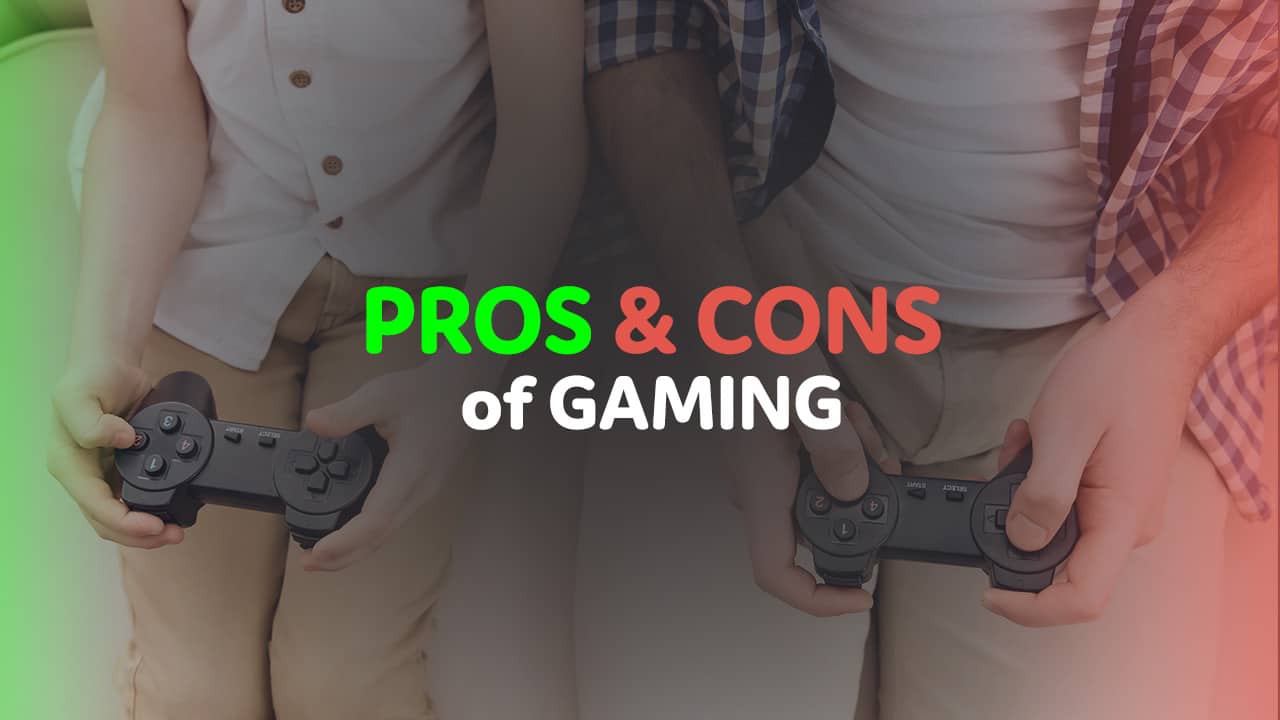 Video games have become one of the world’s favorite pastimes. There are almost 3 billion gamers worldwide in 2021, with gaming prevalence continuing to grow every year.

It’s best to look at the pros and cons of video games through your personal experience and remember that the key is gaming in moderation.

Although research is still ongoing on the pros and cons of video games, some studies thus far have shown the following benefits when an individual plays video games:

These pros of video games might help you with tasks that you do every day, but they might also be applicable for jobs where you require a great deal of attention and concentration, such as working as a surgeon, driver, or programmer.

On the surface, these pros of video games look appealing. Still, it’s important to remember that these positive effects of video games come with a catch: they can be far outweighed by the cons if gaming becomes an addiction.

These are the pros of gaming. You can read our full article about the positive effects of video games here.

Video games have shown to improve your cognitive abilities, such as:

For example, a study from 2018 included 170 participants. In the study, one group was made up of gamers, while the other group was non-gamers.

Both groups received the same questionnaire with questions and assignments that would test their cognitive abilities. The group of gamers showed better results in almost every field of the test.

Video games involve a lot of critical thinking, problem-solving, and the use of logic.

As a gamer, you have to work your way through the game by using specific skills to achieve the game’s goals.

Developing these skills in video games may translate into better job performance or improved performance in school.

Playing video games improves your hand-to-eye coordination, making you more capable of performing tasks that involve coordination of your eyes and your hands.

These tasks can include everything from everyday tasks such as driving, typing, or performing manual tasks with your hands to professional skills like performing surgeries.

These improvements were confirmed by a study from 2007, which involved laparoscopic surgery trainees that also played video games. The study found that surgeons who played video games regularly had higher accuracy and could complete tasks faster than non-gamers.

Another pro of gaming is the ability to make more accurate decisions in a much quicker fashion.

Players of video games will tell you that several games prompt you to make your decisions quickly based on the information you receive from the game itself. Fast-paced games, in particular, contributed to a gamer’s ability to make quick decisions.

Some games, especially competitive ones where you play against other players, can be punishing if you make a wrong decision. For example, the game Call of Duty involves fast-paced action, and you need to make the right decisions at the right time to win.

Again, this skill can be crucial in several fields of work, such as in the army or in the hospital, where you need to make fast and accurate decisions based on the facts and information you have, especially when you have limited time.

Video games and eyesight quality is still a hotly debated topic. Some studies tell us that excessive screen time causes eyestrain and might even hurt your eyes. In contrast, other studies show us that video games can improve your ability to see details in your sight, especially in your periphery.

Studies that show excessive screen time is harmful find you may experience negative effects such as eye strain, headaches, loss of focus flexibility, nearsightedness, and even retinal damage.

On the other hand, playing video games might improve your ability to see more details in your eyesight, especially in your periphery. This development of your eyes might help you drive better and perform various tasks that include driving.

It’s essential to stay within the recommended screen time guidelines for all ages since too much screen time may cause damage to your eyes. However, if you play games in moderation, you might even be able to see some positive effects on your eyesight.

Video games can promote teamwork and social engagement with other players, making it a modern form of socialization for kids and young adults.

Also, several games present the opportunity to make new friends and connect to them in ways that no other medium does, including the chance to meet people from all over the world.

However, excessive playtime can lead to increased isolation and loneliness, which are linked to mental health problems like depression and social anxiety. Although gaming is a social outlet for many individuals, and making new friends from different cultures is possible, a balance of in-game contacts and real-life friendships is crucial.

Despite several benefits of playing video games, there are also many disadvantages of video games that might impact the quality of your life.

These are the most common cons of video games:

Video Games Can Make You Addicted

The first and the biggest problem with video games is that they can make you addicted.

Video game addiction is a rising problem and likely to increase in the future. The World Health Organization has recognized gaming disorder as an actual mental health condition, and global prevalence is around 3-4% of gamers. Considering that there are about 3 billion gamers globally, the number of addicted gamers is estimated to be between 90 – 100 million.

One of the main reasons behind the pandemic of video game addiction is that video games are designed to be addictive. They provide instant gratification and encourage gamers to keep playing every day. Players who play every day may even receive bonuses and special rewards in encouraging them to play even more.

But the concept of addictive video games is even more complicated. They manipulate several aspects of our psychology, such as:

Once a video game becomes an addiction, it will far outweigh all the pros of video games. It will impact your professional life, personal development, and interpersonal relations.

If you feel like you or someone you know is addicted to video games, feel free to try some of the programs and resources we have on Game Quitters:

Several studies (1, 2, 3) have shown that video games are a risk factor behind aggression.

However, the studies also found that video games are not the only factor behind this aggression. Video games might increase the risk of aggression in an individual in combination with other factors.

There’s also a stigma around video games promoted by the media, which says that video games are violent and promote violence. But it’s far too easy to pin this problem down solely to video games, although they can be a contributing factor.

Although the link between video games and violence is still hotly contested, many parents report increased aggression in their children when playing excessively, including damaging property. Therefore, parents should be mindful to ensure their children play age-appropriate games and seek professional support if they experience increasingly aggressive behavior.

One of the main problems with playing video games too much is that they neglect other key areas of one’s life, such as one’s personal or professional life.

It’s a safe place to fail, and it presents an easy way to escape real-world problems. Although escaping from stress is not necessarily bad, the problem occurs when gamers start to neglect other critical aspects of their real life.

When that happens, it might be time to consider limiting your playtime, replacing it with other activities, and dealing with your life problems.

Modern video games are linked to gambling through loot boxes and microtransactions that promote compulsive spending.

Gamers who suffer from gaming addiction can also develop a gambling addiction, exacerbated by the seeming ease of access to gambling-like mechanics inside modern games. Many of these games are played by kids, meaning that children have access to gambling mechanics using real-life money. Parents report discovering hundreds or even thousands of dollars spent on their credit cards without their knowledge.

Excessive game time can lead to physical and mental health issues, which include:

It’s important to take a closer look if you develop any of these symptoms; you may want to consider video game addiction therapy if you do.

Spending a long time in front of a screen playing games can impact a gamer’s ability to focus and concentrate on other tasks such as school, work, college, or study.

Games demand a lot of attention to detail and concentration. But, unfortunately, we’re only able to focus for a certain amount of time daily, and the more time you spend gaming, the less attention you will have for other tasks.

The pros and cons of video games are interlinked and will differ from one gamer to another. There are some positive benefits of games when played in moderation. However, there are also negative effects if played excessively.

You should always be aware of the cons of games, and if you notice the first signs of these cons developing, you should consider moderating your gaming or seek help to prevent further problems with gaming addiction.