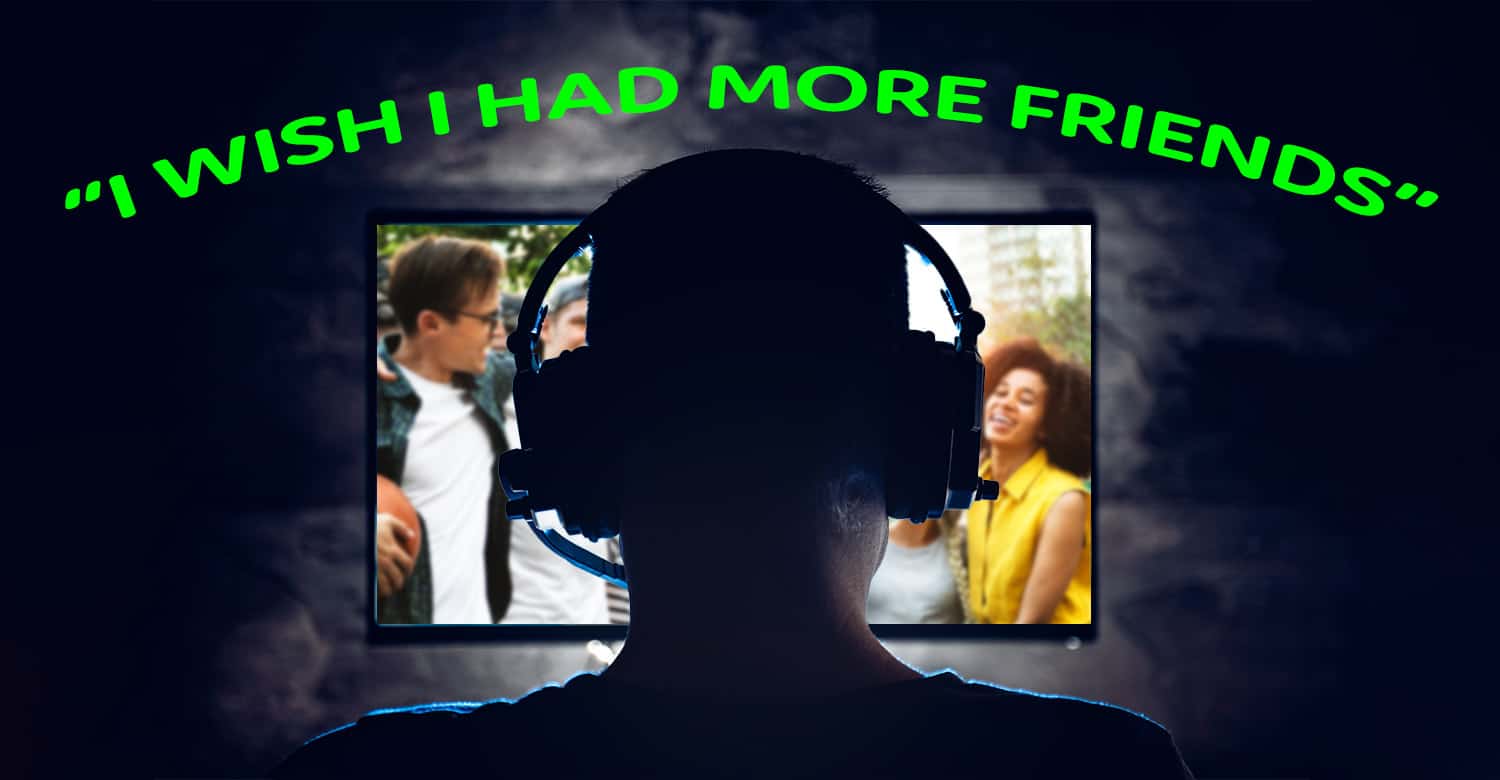 It’s Saturday night. Your friend is having a party and you’re invited. An hour before the party, you decide not to go. You text your friend with an excuse and stay at home to play video games instead. Weeks and months go by and you avoid several more parties because you don’t want to miss out on gaming. Eventually, your friends give up and stop inviting you.

However, you now feel lonely and isolated – you miss your friends and regret prioritizing video games. Does this sound familiar?

This article looks at the social effects of video games, including the positive and negative impacts of gaming on social skills. And also what strategies you can use to improve your social skills if you are noticing they are a problem for you.

Get immediate help for a gaming problem. Book a free Gameplan call now to learn if our program is the right fit for you.

What are the negative social effects of video games?

Excessive gaming can negatively impact social skills due to the lack of face-to-face interaction, the toxic nature of gaming and withdrawal from other social activities. Here are some of the adverse repercussions of unhealthy gaming habits:

If you play video games too much, you can stop paying attention to your social skills. Developing social skills is one of the most important things you can do in life, but when you spend the entire day in front of a screen, you have few chances to hone that skill. This can lead to a deterioration of social skills, which results in a worse quality of life. We all need social skills, whether it’s to find a job, nurture a relationship or make friends.

Many young people are stuck in the vicious cycle of gaming-induced social anxiety: they don’t develop social skills because they play video games so much, but they can’t socialize properly because they have social anxiety and don’t have the right skills to do so.

People who suffer from video game addiction are more likely to have social anxiety than people who don’t play games excessively. 1 1. https://akjournals.com/view/journals/2006/9/3/article-p617.xml × This is because social anxiety and gaming disorder are closely related and usually affect each other. You might develop social anxiety before getting addicted to video games – or it can happen the other way around.

Constantly playing video games to the detriment of other interests and activities is a slippery slope. You’ll start to neglect your friends and family which can leave you isolated and unable to re-establish or strike up new relationships.

Some gamers compensate for their loneliness by meeting other gamers online, which can be helpful. However, these friendships are not the same as in-person relationships, so they’re not a long-term, sustainable solution for loneliness.

The key to overcoming loneliness – and using video games as an escape – is gradual exposure. You need to try other hobbies that will allow you to socialize and find new friends in the physical world, even though it might seem intimidating at first.

The social consequences of gaming addiction can be devastating. It can put a huge strain on relationships with family members and friends. Lying about the amount of time spent gaming and neglecting others to play video games compulsively can cause conflict, confrontation and even marriage breakdowns.

One woman posted about this issue on HuffPost. 2 2. https://www.huffpost.com/entry/my-husband-plays-video-ga_b_11493336 × She complained about her husband was addicted to playing video games so much that she was reconsidering the marriage, even though she was pregnant with his child. She explained that she was worried about the future as her husband was withdrawn and in denial about the extent of his gaming problems.

This is just one example of how gaming impacts social skills and can ruin relationships. It might not be your spouse that you’re letting down; it could be another family member or friend, or it could even be a wife addicted to gaming.

If you’re socially anxious and don’t have well developed social skills because of playing video games, you probably don’t go out very often. As a result, you rarely meet new people, try new hobbies or have adventures and this can cause depression because life starts to lose its meaning.

This happened to Anthony, who, after many years of gaming was depressed and isolated and became suicidal. He started seeing a therapist because he was desperate for a change. This helped him to rediscover his passions and purpose in life.

Get gaming under control without cravings, boredom or wasting time on other internet activities through our Respawn Coaching program.

The toxic nature of gaming can cause social problems for people who play excessively. If you have video game addiction, you may well have experienced online toxicity, harassment and hate.

Players sometimes try to rationalize toxic gaming culture as a normal part of gaming. In fact, research has shown that toxic behavior is contagious 3 3. https://www.sciencedirect.com/science/article/abs/pii/S0747563220300972 ×  and regular exposure increases the likelihood that someone will bully and abuse other players in future games. Learn more about the dark side of gaming culture in our story on how the toxic gaming community made me quit gaming.

What are the positive social effects of video games?

Despite the negative effects of gaming mentioned above, can video games improve social skills? There are a number of social benefits of gaming:

There are many prosocial games that promote the social aspect of gaming. Some games involve cooperating with other players and talking to them via text or voice chat. This can improve communication skills and encourage social interaction. Three studies conducted in three countries with three different age groups found that students who played more prosocial games behaved more prosocially. 4 4. https://www.ncbi.nlm.nih.gov/pmc/articles/PMC2678173/ ×

Gaming can be an ice breaker

The social aspect of gaming has grown beyond just playing prosocial games. Gaming can be a good ice breaker in face-to-face interactions and is often a popular topic of conversation among students at school and college. Find out more about gaming and students: benefits and risks.

There are an increasing number of scholastic esports teams and clubs being formed which encourage social connection. Although, players are primarily playing online, other team members are likely to be based locally so there are opportunities to meet face to face and game in person together.

There is an increasing convergence between gaming and social media platforms, such as Discord, that make it easy for players to connect and engage. Discord is a free voice, video, and text app that enables gamers to join a group chat with one or more other gamers so they can talk in real time while playing.

How to get help

If you, or a family member, are experiencing any of the negative social effects of gaming mentioned in this article, we recommend working with a Game Quitters coach.

At Game Quitters, we have a program called Respawn, where you will learn how to manage your gaming habits and get your social life back on track.

Next Post: Do Video Games Cause Violence: Fact or Fiction?