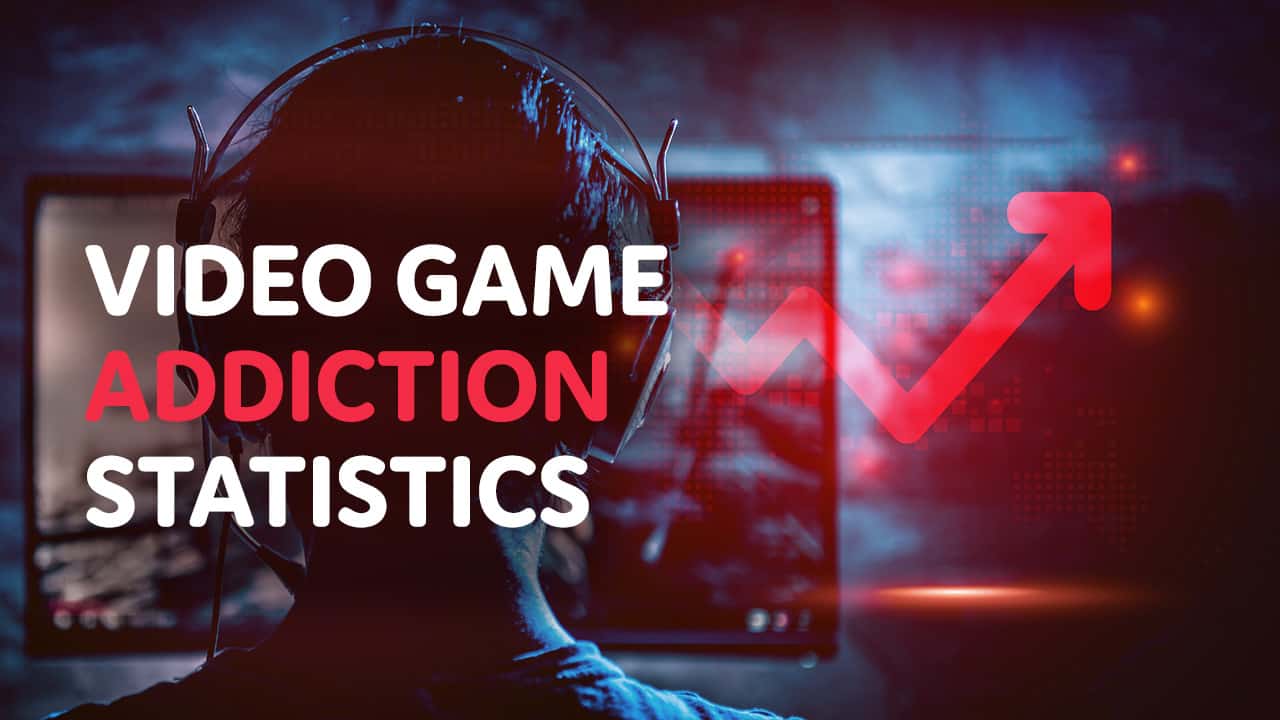 Video game addiction is a growing problem in modern society. While some people are not aware of it, others call video games “the new drug.”

In 2019, the World Health Organization recognized “Gaming Disorder” as a mental health condition. It will be officially added to the International Classification of Diseases, ICD-11, in 2022.

Unfortunately, video game addiction hasn’t always got the attention it deserves with mental health experts and research funding focused on other disorders – such as gambling and substance abuse.

Even though the field of video game addiction research and treatment is not yet fully understood and developed, there are many high-quality papers and studies into video game addiction statistics, demographics, and prevalence rates that provide us with valuable insight into the depth of the problem.

Let’s take a look at the most interesting video game addiction statistics.

If you take a look at the general video game addiction statistics, you can see that millions of people worldwide suffer from gaming disorders. The conservative estimate of addicted gamers is around 60 million.

Gaming as an activity is continuing to grow every year. In 2015, there were 1.9 billion gamers; in 2021, there are an estimated 2.81 billion gamers, and the number is anticipated to surpass 3 billion by the year 2023. This tells us the number of gamers suffering from gaming disorder is also going to grow each year. 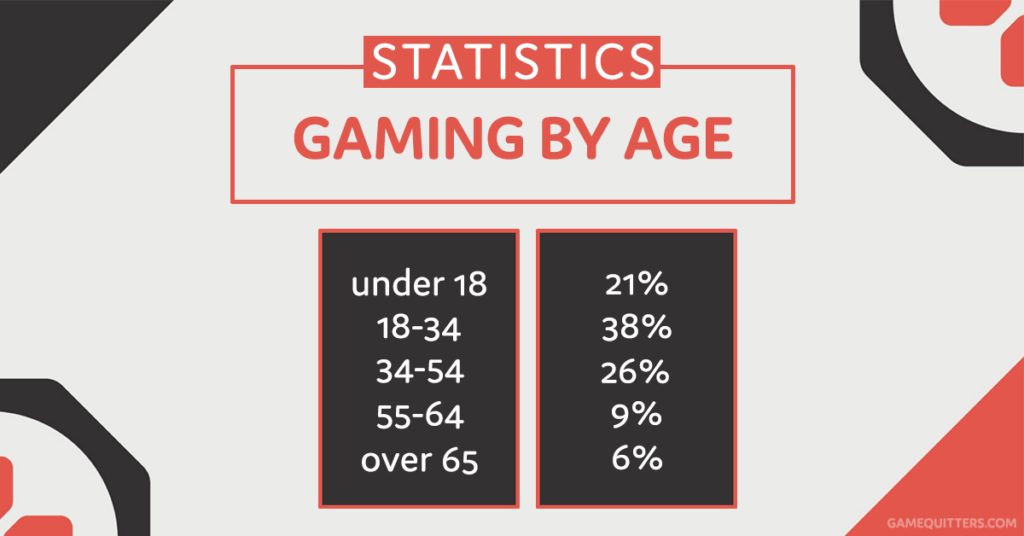 Statistics tell us that video gaming addiction is by far the most problematic in people aged 34 and younger, with the average age of a gaming addict being 24 years of age. This is cause for concern because the percentage of American children that play video games is now 90% or more of all children. More young people are playing video games than ever before, and they are exposed to the risks of video game addiction.

Although young adults between 18 and 24 years old tend to be the ones experiencing the most harm from their gaming, such as struggling with college or university, they often develop the problem in adolescence.

The problem of gaming addiction among children is so vast in South Korea that the government has introduced a “Shutdown law” which prevents youths of 16 and under from playing video games between 0:00 and 06:00. There are an estimated 600,000 South Korean children suffering from gaming addiction.

One of the crucial challenges we face for the future is preventing and treating gaming and tech addiction in children, which, despite all the efforts from governments worldwide, seems to still be on the rise.

Distribution of gamers by ethnicity in the United States: 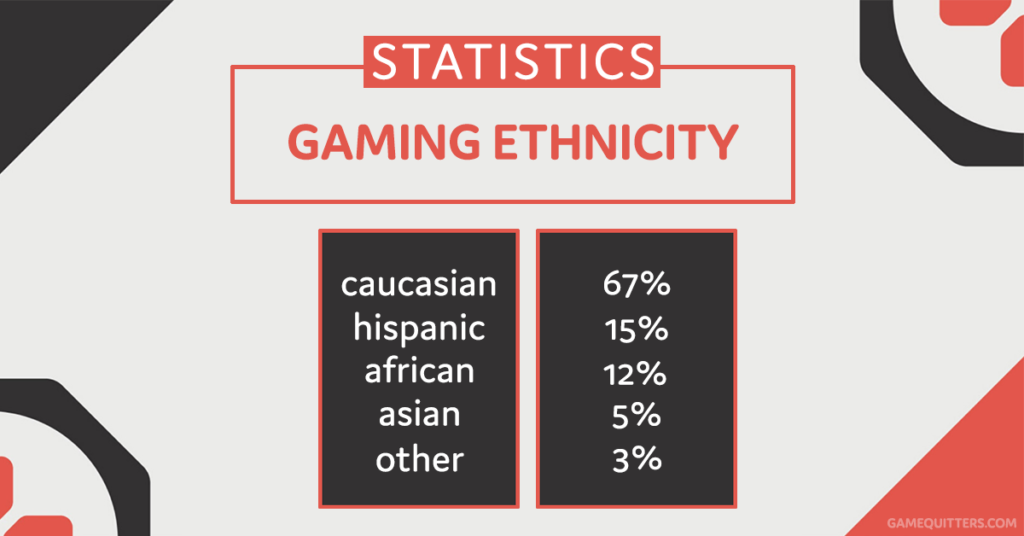 We can see that there is a clear prevalence of Caucasian gamers in the United States, with 67% of all gamers. 15% are Hispanic, while 12% are African American, and 5% are Asian.

If you take a look at the distribution of gamers suffering from gaming disorder by ethnicity, you’ll find that 69% of all addicts are Caucasian, 13% are Asian, and 18% percent belong to the category of Other.

According to a study from 2015 done by the Pew Research Center, the distribution of gamers between the two genders is almost even – 50% of all gamers are male, while 48% are female.

This distribution by gender might surprise some, as gaming is primarily seen as something that only boys do.

However, taking a look at gaming disorder statistics by gender, and you’ll find that 94% of all gaming addicts are males, while only 6% are females.

These numbers tell us that while the number of male and female gamers might be the same on a general level, the number of gaming addicts is currently more male-heavy.

But why does this happen? Why are there more male gaming addicts than female addicts?

This issue might be closely related to how males perceive gaming cues in their brains.

According to this study from 2018, “gaming-related cues elicit higher cravings in male subjects than female subjects.” The study found that males had greater activation in the striatum before gaming and great activation in the medial frontal gyrus after gaming. This tells us male gamers are more likely to get addicted to video games.

Another reason for statistics showing males are more likely to be gaming addicts may be due to selective sampling in research studies. Similar to conditions like Attention Deficit Hyperactivity Disorder (ADHD), where females have often been under-diagnosed as they do not display the “typical hyperactivity” symptoms, female gamers may be under-represented in gaming literature as well.

According to Vladimir Poznyak, a researcher for the WHO (World Health Organization) who focuses on gaming disorder, geographical location has little to no impact on an individual’s likelihood of getting addicted to gaming.

However, less developed countries are quickly catching up with global smartphone penetration estimated to be 78% or higher. With technology continuing to accelerate globally, we may see a boom of gaming addicts in the coming years and decades.

There aren’t many statistics that tell us more about gaming disorder and its correlation to location, but these are some of the more interesting ones that are available:

The number of total gamers in the United States is still unclear. Some sources say there are more than 150 million gamers in the US, although that source goes back to 2015. A more recent report from 2020 states that between 64-66% of the general American population play video games to some extent.

The video gaming industry continues to grow in Canada, contributing $4.5 billion to Canada’s GDP in 2019. The vast majority of Canadians (94%) aged between 18 and 34 play video games, including 64% of the entire Canadian population – 23 million Canadians – who play video games regularly.

Video game addiction in Canada is estimated to impact between 470,400 and 720,000 people, with gamers at risk of unhealthy play as high as 3 million Canadian gamers.

In 2020, around 36 million Britons played video games regularly. In terms of the percentage of the entire population, that amounts to just slightly less than 50%. 18% of UK gamers spent 6 hours or longer playing video games daily, and about 30% skipped showers to play games. The most represented age group is gamers aged between 13 and 25, and the second most represented group is for people aged between 25 and 34.

Alarmingly, up to 93% of UK children play video games in some shape or form. FIFA, Fortnite, World of Warcraft, and Call of Duty are UK’s most addictive games.

However, reports indicate the number of addicted gamers in the UK has tripled because of the pandemic.

With 36 million Britons playing video games regularly, we estimate between 700,000 and 1 million UK gamers struggle with a video game addiction.

6 in 10 Australians play video games regularly, which is close to 67% of the entire Australian population.

For all gamers in Australia, the average playing daily time is 89 minutes, which is higher than the recommended limit of 30-60 minutes that are in place for children. The playing time seems to be longer for males, who play video games for 98 minutes daily on average, while females play for 77 minutes on average daily.

A recent study done by the Department of Psychological Medicine at the Nepean hospital in Sydney revealed that up to 10% of all Australian gamers were addicted to video games.

In the general population, we estimate between 328,300 and 502,500 Australian gamers struggle with gaming addiction, with up to 1,675,000 at risk of developing a gaming problem.

In recent years, the video gaming addiction problem is a growing concern for the UAE health authorities. The Department of Health in Abu Dhabi (DoH) released a statement where it recommended that children’s gaming time should be kept to under two hours daily.

This recommendation comes as no surprise. Reports of children spending more than four hours a day gaming are cropping up throughout the whole country, which means that stricter measures for controlling video game addiction need to be put in place.

One of the more alarming statistics comes from 2015 when the researchers found that between 56-63% of all children in UAE spend three hours or more daily gaming or doing other activities on their screens.

In fact, 50% of all UAE gamers admitted that they have spent more time playing video games because of the pandemic. In UAE, there is also a sharp increase of at least 15% of new gamers, of which 40% are female gamers.

The vast majority of gamers in the UAE (70-74%) are mobile gamers, while many gamers also play console and PC games. An even more problematic statistic is that up to 91% of all UAE gamers have spent money on in-game purchases in the last six months, which shows an alarming correlation between gaming and gambling.

We all know about the negative consequences of Covid lockdowns and the mental health of people all over the world. More people spend more time in front of screens, which also includes more people playing video games.

And this trend is also visible in UAE. Up to 50% of people spend more time gaming during the lockdowns – of which, the majority of them are mobile and console gamers.

There are also more people watching gaming streams in UAE. Up to 68% of all gamers also watch live streams of other people playing video games, which leads to other potential mental health problems and an increase in the likelihood of playing video games again.

UAE continues to be one of the top 100 markets for the video gaming industry, and the number of gamers is still on the rise, especially after covid lockdowns. Mental health experts from UAE are warning about the increase in video game addiction in the country.

One of the biggest obstacles to mental health professionals in the UAE is a lack of awareness when it comes to gaming addiction. More needs to be done in spreading the word about the pitfalls and dangers of this addiction, especially among parents of children who play games regularly.

With over 7 million gamers in the UAE, we estimate between 137,200 and 210,000 Emiratis are struggling with gaming addiction.

If you are passionate about supporting the UAE with its gaming problem, please contact us for details on INTENTA’s initiatives in the UAE.

We know that Covid-19 and its lockdowns have had a profound effect on the number of gamers around the world. The gaming industry has seen a 63% increase in games sold because of the pandemic.

These are the official numbers for video game addiction during Covid-19:

The pandemic has had a huge impact on the number of people addicted to video games. Gaming, gambling, loot boxes, mobile gaming, and excess use of screen time have soared sharply over the course of the pandemic.

Want to know more about gaming addiction and how to overcome it? Then join us here at Game Quitters, where we provide video game addiction articles every week, along with additional resources for gamers, families, and loved ones.